In the June Dog and Hat Box, we have Steampunk Coffee Roasters, another coffee company that has been popping up on my Instagram and quickly made it onto my list of companies to try from, so what a treat to have it in the first box I subscribed back to Dog and Hat in!

Who are Steampunk Coffee Roasters?

Based in the beautiful Scottish seaside town of North Berwick, we roast fully traceable and ethically sourced coffees with a focus on quality, sustainability and community and ship worldwide.

The business was founded by Catherine Franks in 2012, it all started with Mavis the 1976 WV Campervan primarily used for events, festivals and markets. This very quickly led to Cath roasting in her garage, from there she ran a few pop up cafes in special places and museums. In 2014 they moved to the location they are in today, and love the space.

Meeting customers and supporting Berwick upon Tweed are a primary focus for Steampunk, they love their local area! 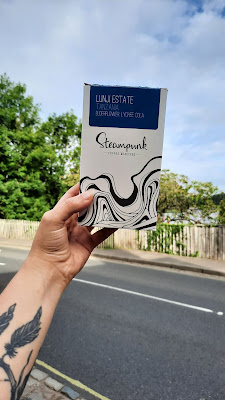 This coffee’s origin story touches on the complicated colonial history of the coffee industry. Lunji Estate was first planted with coffee in 1898, when Tanzania was a German colony. Since then there have been several owners including for some time German Colonial Administrator, who ran the estate until the 1970’s. When the current owners, Clemens and Stella Maier and Thomas Plattne, purchased the Estate in 1994, it had fallen into disrepair. Clemens, a German, and his wife Stella, who is Tanzanian, worked to bring the farm back into production.

According to the information from our importer, Mercanta, Stella’s ability to speak the language and develop a relationship with the local community proved crucial for the wellbeing of the farm. Today, many of the people who work on the farm have been employed there for 20 years or more, and some of them are descendants of the same people who worked there in previous eras. Lunji Estate employs 27 people year-round, and this increases dramatically during the harvest and processing times. 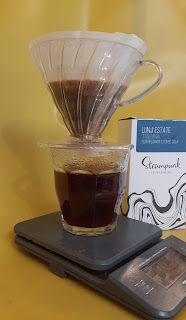 For this brew I used the trusty V60, I felt the recipe brought out the best flavour.
15g of Coffee
250g of Water
30 Second Bloom with 35ml of Water, with agitation
3 Minute Total Brew Time 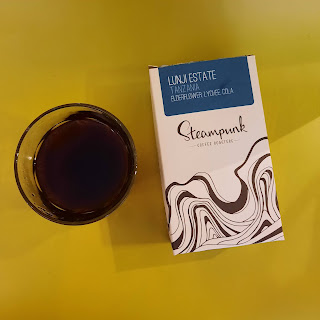 I’ve never had a Tanzanian coffee before, so I was super pumped when this beauty arrived in the box. The brew came out incredibly floral, with some fruity acidity which settled as the coffee cooled more. The floral hits coming from this coffee were incredible, it was super bright with a sweet hit right at the finish, making this an absolutely delightful cup.

If this is what Tanzania coffee is like, I will take 12. (cups or boxes, I’m not fussy) 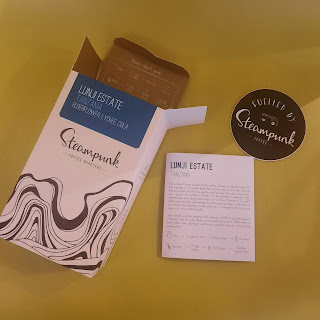 Little Extras
This box also surprised me with a sticker! You know I always love a good sticker, this will be going straight on my coffee table!
Find Steampunk Coffee
That’s the end of the June Dog and Hat box! 3 amazing coffees – if you missed the other two blog posts that included the other coffees from this box you can find them below
This article was originally published by Thecoffeelife.co.uk. Read the original article here.
SaveSavedRemoved 0

Why Wildland Coffee Is My New Camping Coffee Of Choice